On Pain and Suffering 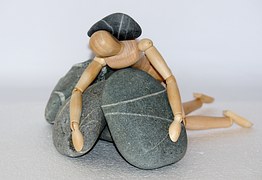 When Ran was 8 years old his father was killed in during a military combat operation. His memories of his father were only from family trips and spending weekends at the pool. However, Ran learned that life moved on. His mother worked and raised him just like the other children in his neighborhood. Ran served in the army, graduated from college, married, and moved to the United States. He constantly thought about his father, and was jealous of children who had a father, but learned to keep his thoughts and feelings inside.

Recently, Ran started to feel physical and emotional pains. He underwent medical tests and the results turned out normal. His thoughts about his father returned, thinking on what he missed by not having a father. Ran rarely shared those thoughts with his wife because he did not want to hurt her. His primary physician suggested he should see a psychotherapist.

Most of us are familiar with the concepts of pain and suffering, and we tend to confuse between the two. Pain is defined as a sensory and emotional experience associated with an unpleasant bodily injury or mental injury. Pain is part of our lives, and sometimes the most important part of survival. Suffering is the perception of the pain experience. Suffering concerns our thoughts about pain, about what happened, and about what might have happened. Our mind becomes part of the pain experience. In sessions, hearing himself talk about his pain of having a life without a father, and about the loss he suppressed all his life, Ran began to unravel his emotions and cry. Ran understood that the pain of losing his father will always remain a part of his life but he does not need to suffer. Ran practiced mindfulness breathing to relax and become aware of what is happening inside his body and mind. Mindfulness approach helped him make a distinction between the pain and suffering he experienced in his life. He realized that he spent too much energy to ignore the pain, fight with it and that his suffering is related to his thoughts about a reality which does not necessarily exist. In reality he is a father to a son and his son has a father that he himself unfortunately never had.

You are not the pain. The pain is part of your life experience.