Is the Secret to a Good Marriage Still a Secret? 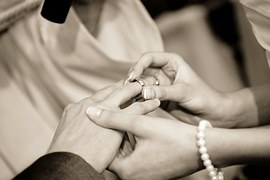 Nancy and Michael called to set up an appointment. They are both in their 40s, married for 18 years with three children. Both complain of endless arguments about “silly things” and feelings of hopelessness. After several intense fights, Michael left the house only to return a week later. They both decided that they would like to stop fighting and just have a “happy and healthy” relationship.

What is a happy marriage? Does it even exist? Countless research and literature has been done exploring the things many of us wish for: feel good, be happy, and have fun. However, are these things even possible after years of marriage?

The short answer is ‘yes, it is possible but…”. During our sessions, Nancy and Michael were asked individually to describe what does happiness mean to them and how does it fit into their relationship. This was not a simple exercise, as we are dealing with two people with unique feelings, ideas, and thoughts that may not perfectly align together. The main way to address the underlining issues in the relationship is to start a dialogue where each partner openly listens to the other.

Professor John Goodman from the University of Washington conducted interviews with around 95 couples and concluded that:

The psychologist Albert Ellis exclaimed that in marriage, each person has an inclination for irrational thinking which causes disappointments, rather than simply the behavior of the spouse. Nancy says: “Michael always forgets our anniversary. It doesn’t interest him”. While Michael says: “she is always promising that she will spend more time with me, but things always seem to pop up that are more urgent, I’m sick of her excuses”.

If Nancy and Michael understand, through therapy, that his thoughts are irrational due to the idea that “she must be with me” and her thoughts are irrational due to the idea that “it is awful that he forgets” they can change their irrational thinking to rational ones. For example, she will say to herself, “I wish that he would remember our anniversary and it disappointments when he doesn’t. However, that does not mean that he does not love me. I will talk to him before our anniversary comes around and we will plan something together”. Likewise, Michael will say “I would like to spend more time with Nancy. I know she is very busy so I will try to help her get the work done so we can spend time together”. A change in thinking even when dealing with the same behavior will create a more pleasant experience for both partners. Now going back to our original question if a happy marriage exists? Both partners’ definition of marriage is important, and maybe the answer is “good enough marriage”.