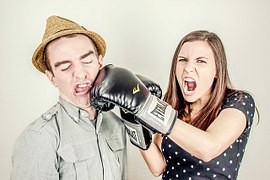 “When we first met we had fun, we loved being together, everything was perfect between us, and there were no fights. After we moved in together, we had small disagreements about silly little things, but since we got married it became worth.” Does this sound familiar to you? Moses (42) and Marine (39) were married three years ago and are experiencing this same scenario. Marine approached me after a lecture I gave on a similar topic and asked if they could meet with me. Marie was worried about repeated disputes and difficulties in communication with her husband. We all want to take long romantic walks on the beach while embracing our loved ones. It feels incredible to be in love, but life usually creates additional challenges for us. Marine and Moses had witnessed arguments between other couples, but they never thought that it would happen to them. With all of the constant fights they go through, Moses started to lose hope and even considered marriage separation. Dr. John Gray, relationship expert and author (“Men Are from Mars, Women Are from Venus”) indicates that one of the challenges between lovers is dealing with differences in opinions and disagreements.  Marine says that when they do not agree on something, the situation quickly escalates into an argument, followed by a fight where they insult and blame each other for things from the past. Eventually, they both feel hurt and beaten, and usually do not even remember what they were even fighting about.  In the case of Marine and Moses, we worked together using the approach of Dr. Gray: When we attack one another, we feel unloved, and this feeling prevents us from developing intimacy and trust with that person. “Men from Mars” are better able to deal with disputes when their emotional needs are met. Moses expresses that he does not feel loved, appreciated, or even wanted. Once Marine became aware of it, instead of attacking him when a disagreement arises, she can express how she feels when it happens. For example, instead of yelling at him ‘how did you forget to buy what I asked you?”, she can tell him that she is hurt when he forgets to do the things she asks of him. Such a response allows him freely and openly listen to her words and understand that she is angry with him. “Women from Venus ” have the need to feel justified, listened to, and cared for. So while they argue, it is important for Moses to admit that sometimes he does not notice his actions and that he is sorry for disappointing her. For example, “you are right. I understand that I disappointed you”. Then, only when she’s ready to listen to him, he should tell her the reasons for his actions.

It is possible to reduce the amount of fights and insults when each side understands the needs of the other person, and does not interpret actions as a personal insult. Differences in opinion do not hurt us, but rather the way in which we respond to them do. It is better to reach a mutual understanding and agreement than to blindly argue with the other person.